These notes are intended to help those exploring Baptism at St John Henry’s. Please read thoroughly before getting in touch with the Parochial Administrator for an initial chat.

The Baptism of Adults

Since the beginning of the Church, the Christian initiation of adults responding to the preaching of the Gospel is accomplished in the reception of the sacraments of Holy Baptism, Holy Confirmation, and Holy Eucharist. Through these sacraments, the faithful are made members of the Body of Christ and sharers in the Priesthood of Christ, in Christ's prophetic and royal mission. Indeed, ‘the communion of the baptised in the teaching of the Apostles and in the breaking of the eucharistic bread is visibly manifested in the bonds of the profession of faith in its entirety, of the celebration of all the sacraments instituted by Christ, and of the governance of the College of Bishops united with its head, the Roman Pontiff’. (Pope Benedict XVI, Anglicanorum coetibus)

The personal ordinariates share in the mission of the whole Church of handing on and nourishing the faith received from the Apostles. Through the continual proclamation of the Gospel by the Church, adults in every age are called by the Holy Spirit to conversion of life and to follow Christ the Lord as his disciples. Through Holy Baptism, adults who are baptised are conformed to Christ in the likeness of his death so as to rise with him to newness of life with all their sins forgiven.

Given the unity of the Sacraments of Initiation, unless there is a grave reason to the contrary, an adult who is baptised is to be confirmed in the same celebration and is to participate in the eucharistic sacrifice also by receiving Holy Communion. (CIC 866). ​

The Baptism of Children

‘Born with a fallen human nature and tainted by original sin, children also have need of the new birth in Baptism to be freed from the power of darkness and brought into the realm of the freedom of the children of God.’ (CCC 1250)  The practice of infant Baptism is an immemorial tradition of the Church. Infants are baptised into the faith of the Church, a faith which is professed for them by their Parents and Godparents during the sacramental celebration. For the grace imparted in Holy Baptism to unfold, children must be formed in the faith in which they have been baptised. In this way, they gradually learn God's plan for salvation in Christ and ultimately accept for themselves the faith in which they have been immersed.

One feature of Divine Worship: Order of Holy Baptism which warrants further comment are what is known as ‘The Duties’ which, in the order of infant Baptism, follow the Lord’s Prayer, and immediately precede the final blessing. The Duties are exhortations to the parents and godparents concerning their sacred duty to provide for the religious formation of the child. Their specificity is striking, reminding the parents and godparents of their obligation to teach the child the Creed, the Ten Commandments, the Lord’s Prayer, the Hail Mary and to instruct the child in the Catechism so that the child may be presented to the bishop for Confirmation and admitted to Communion in the Body and Blood of Christ. In addition to being a rather felicitous articulation of the role of parents and godparents in sacramental initiation, the Duties were judged to be integral to the Anglican tradition and therefore included in the current liturgical provision for the Ordinariates. - ​Bishop Steven Lopes

Adult Baptisms are scheduled as part of a person’s catechetical instruction in the Catholic faith. Preparation for Holy Baptism forms part of the Evangelium course that will need to be followed in its entirety. Normally, the course begins in September each year and concludes in Lent, so that the Baptism and Confirmation can take place at the Easter Vigil.

Infant and Child Baptisms (under the age of seven) can be scheduled either within the Sunday Solemn Mass (for parishioners), or on a Saturday afternoon (for non-parishioners).

Child Baptisms (over the age of seven) will, in normal circumstances, be followed by the Sacrament of Confirmation.

Baptisms at St John Henry’s are celebrated according to Divine Worship: Occasional Services, the Ordinariate’s official public liturgy.
Paperwork. A birth certificate is not required for Infant and Child Baptisms. However, it is recommended if the last name of the child is in question or is not the one of the natural father. ​​

The role of Godparents in Infant Baptism is especially important since their role as guardians of a child’s faith after Baptism is different from the role of Sponsors in Adult Baptism, who serve as guarantors of a candidate’s faith. Consequently, the Church specifics minimum requirements of all Godparents. All Godparents are:


​Parents may not serve as Godparents for their children.

Unless the Godparents are known to the Parish Priest, a certificate of eligibility must be presented by the Godparents to verify their ability to qualify as Godparents. The form can be downloaded here.

Godparents are not obliged to be present for the Baptism and may be represented by a proxy.

It is permissible to have one baptised person from a non-Catholic Church or Ecclesial Community serve as a Christian Witness, together with a Catholic Godparent.

A Christian Witness must be recognised by the Catholic Church as a member of a non-Catholic Church or Ecclesial Community possessing valid Baptism, and must also be a member in good standing in his or her denomination.

For those Ecclesial Communities whose Baptism is doubtful, invalid, or non-existent, please contact the Parish Priest.

No charge is made for the Sacrament of Holy Baptism at St John Henry’s. A donation is always welcome, but this is at your discretion.

Please make sure that this is discreet during the service. Please ask the photographer or videographer to liaise with the Parochial Administrator prior to the service. 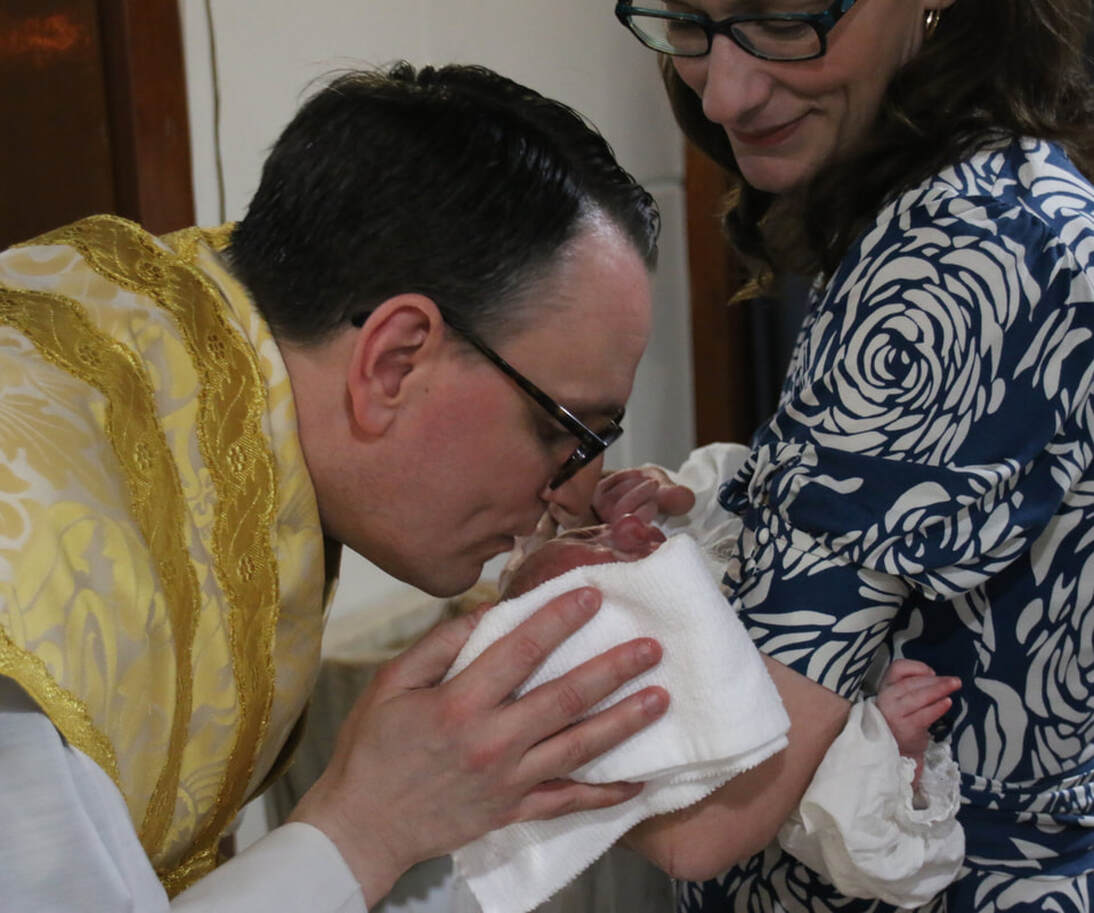